Biden last addressed a graduating class at the Academy as vice-president in 2013. 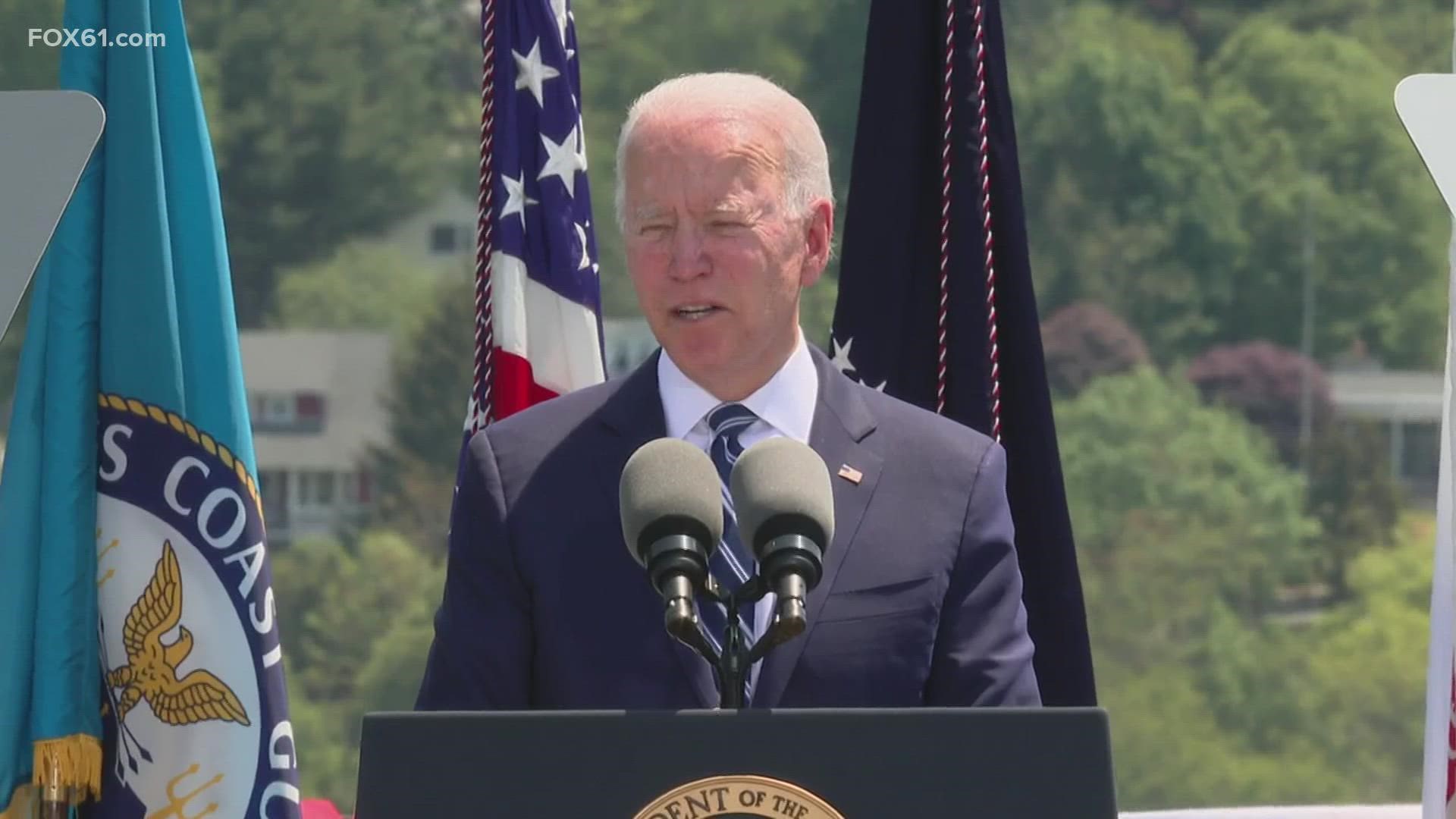 NEW LONDON, Conn. — President Joe Biden will be delivering the keynote commencement address this morning to the Coast Guard Academy in New London.

The ceremony will begin at 11 a.m. and will not be opened to the public.

Despite Connecticut lifting COVID-19 restrictions today, crowd size will be limited and mask-wearing will be required. The event will be available for viewing on the FOX61 News app or at: https://uscga.live/commencement2021

Biden on sexual assault and harassment in the U.S. military

"Every member of our armed forces should feel safe and respected in the ranks. That's why my administration is committed to taking on the scourge of sexual assault and harassment in the military."

Biden noted the Class of 2021 is over one-third female: "There's a saying...'Women hold up half the world.' It's an absolutely stupid position not to make sure they represent at least half of what we do."

"You also have the opportunity, in fact, the responsibility, to build a better Coast Guard for each other and for those whom you will lead in the future. You are the leaders who will lead with honor, and honor will be the reward."

"Sir, the women and men you see before you are ready in all respects, to serve as leaders of character in our service," Kelly said. "They are prepared to uphold their oath, to protect and defend our great nation. And I can attest with great certainty, that they are ready to serve wherever and whenever our nation needs them."

Cadet First Class Sean Edward Seyller said his class may not have all the answers.

“But we have the passion, courage, perseverance to find them,” Seyller said, before ending his address: “Go class of ’21 and go Bears.”

Ceremony begins for the 140th graduating class of the U.S. Coast Guard Academy.

FOX61's Lauren Zenzie caught Marine One about to land at the U.S. Coast Guard Academy in New London.

Biden lands in Rhode Island, will head to New London for the USCGA graduation

Protesters gather ahead of Biden's visit

Protesters concerned over the Israeli-Palestine conflict have gathered at McKinley Park across the street from the Coast Guard Academy ahead of Biden's visit.

"We are really proud to be a Coast Guard city, and it reflects that relationship between the community and institution," said Passero, "The cadets have a special bond with the city, they volunteer in our community and schools, and we really share in a rich history with the Coast Guard. The relationship goes back to the founding of this country."

Biden will land at North Kingstown, Rhode Island before heading to New London for commencement.

Flag raised at U.S. Coast Guard Academy ahead of the commencement ceremony

Old Glory rises over the Coast Guard Academy on graduation day for the class of 2021. #fox61 pic.twitter.com/ENnbhLlRsK

It's exciting to have him here," said Eric Russell, Chairman of the Connecticut Democratic Party, "He's shown and continues to show that he's the leader we need in this moment. He's been really aggressive with combating the pandemic and allowing access to vaccinations allowing people to get back to work. Happy to have him here."

The FOX61 Morning News team is keeping you up to date on the latest!

Our ⁦@FOX61News⁩ Team Coverage continues from the ⁦@USCGAcademy⁩ graduation! Live and All Local 4-11am. pic.twitter.com/PLN5h5Nn2w

Sue Hatfield, Connecticut Republican Party Chair Woman spoke with FOX61 Morning News about the visit of President Biden and what it means to support the men and women who serve.

"As you know, since Lyndon Johnson was the first president to speak at once other commencements, and since then, every single seated president has spoken. It's a wonderful opportunity to have the president here, any president Democrat or Republican," said Sue Hatfield, Chairwoman of the Connecticut Republican party, "We're proud of the men and women here today.

Anticipation is building ahead of the president's visit.

“We are honored to host the Commander-in-Chief as we celebrate the accomplishments of the Class of 2021, the future leaders of the U.S. Coast Guard,” said Academy Superintendent Rear Adm. Bill Kelly. “It will be a memorable event for our community, as well as a great opportunity to showcase the Academy and the city of New London on a national stage.”

This is the president's first time to Connecticut since winning the election in November, but it isn't his first time to the Coast Guard Academy. Biden addressed a graduating class at the Academy while serving as vice president in 2013.

“It's exciting the city very used to hosting the President of the United States generally the President comes every four years,” said Mayor Michael Passero. "Both our police chief and our fire chief were here for years ago when the last president came to the graduation so they’re used to it. We work with the Secret Service."

As New London continues preparing for graduation, police say several parking restrictions will be in effect beginning at 5 a.m. today.

According to Captain Brian Wright, restrictions will remain in effect until later in the day, as New London Police see fit.

Presidents speaking at the Coast Guard Academy's graduation have gone back several decades.

President John F. Kennedy accepted an invitation to speak in May 1964. He would have been the first president to speak at commencement, but he was killed in November 1963.

President Lyndon Johnson spoke in his place. Previously, other presidents, such as Harry Truman, had delivered addresses on campus but not at graduation.

President Richard Nixon, who gave very few commencement speeches, did not speak at the Coast Guard Academy graduation. Presidents Gerald Ford and Jimmy Carter did not speak either.

The last president to speak at graduation was Donald Trump in 2017.