OLD LYME — The statute of limitations, for reporting alleged sexual abuse by clergy in Connecticut, is a problem for one New London man, who is taking his... 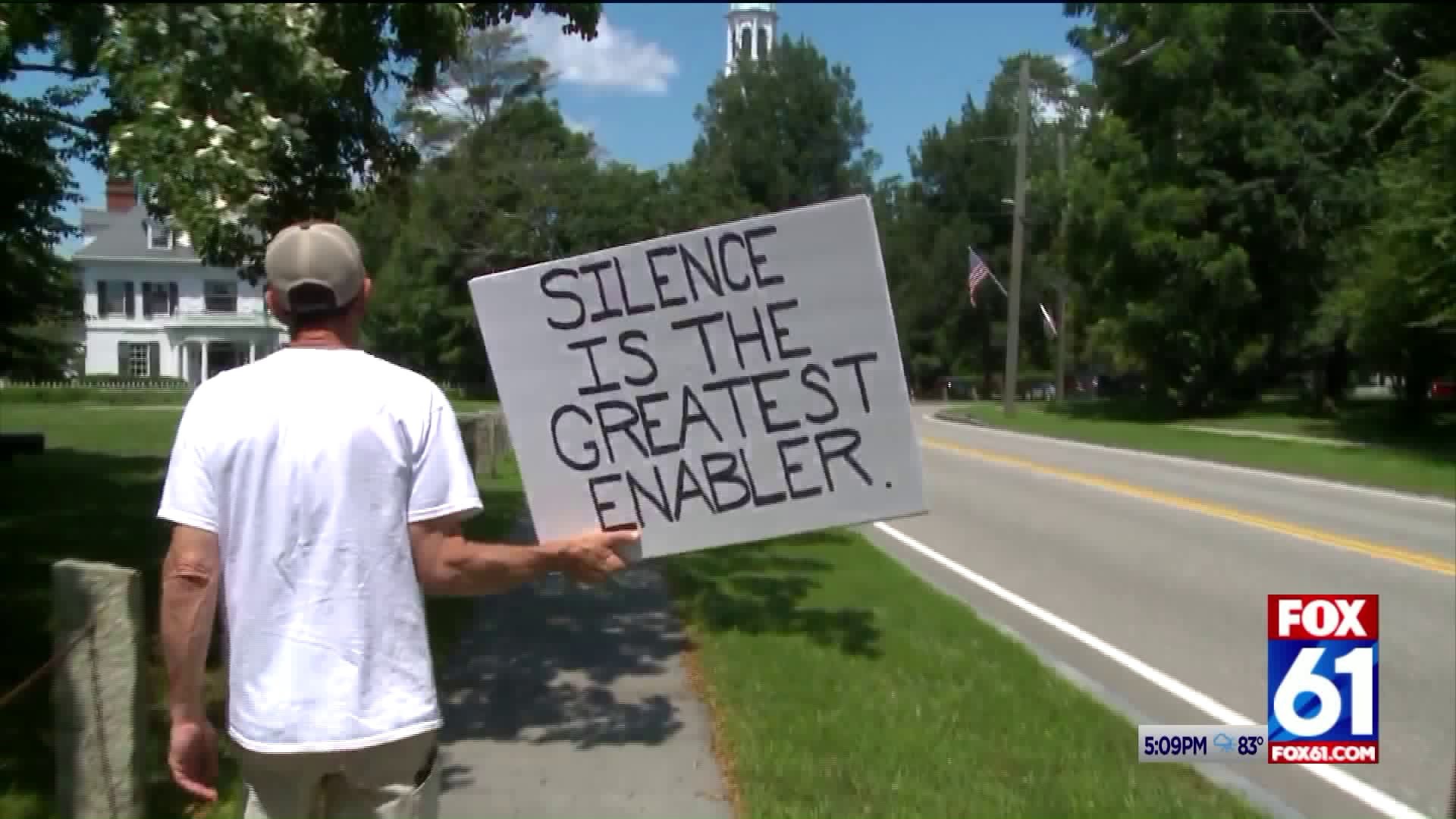 OLD LYME -- The statute of limitations, for reporting alleged sexual abuse by clergy in Connecticut, is a problem for one New London man, who is taking his case to churches throughout the Diocese of Norwich this summer.

Tim McGuire, 60, of New London, Who claims he was abused by his priest at age 8, is calling attention to his case, and others in similar situations, by calling out the Bishop of Norwich through what is essentially a protest tour.

Since his church in the Noank section of Groton, where the alleged abuse happened, no longer exists, McGuire is protesting alleged inaction by the diocese by walking the public sidewalks in front of churches throughout the diocese to tell his story.

Thursday, he received a mixed reception in front of Christ the King RomAn Catholic Church in Old Lyme.

And he is largely doing so by messaging with signs.

“There’s 35 of us waiting to talk to Bishop Cote and he doesn’t want to speak to any of us,” said McGuire.

He’s referring to Bishop Michael Cote, who oversees the Diocese of Norwich. He did not respond to FOX61‘s request for comment on McGuire’s claims.

Connecticut’s revised statute of limitations to report such acts is now 51 years old now. It used to be age 48.

McGuire wants no statute of limitations, though. In part becJse of what he was told when he finally had the courage to report his alleged abuse 40 years after it happened.

“I was 48 years and three weeks old and I was told I am too late and that is the end of story,” he said.

Some stopping to talk to him in Old Lyme said what he’s doing is unfair to these churches, which had nothing to do with his abuse, now 52 years ago. And, they wondered why he waited so long.

“I feel sorry for you,” he said to one motorist, who responded with “I feel sorrier for you. Get a life!”

But, some supported his efforts to put pressure on the Bishop to sit down and talk.

“It’s just plain rude and a typical papist dodge because that’s what they’ve been doing for years,” said Susan McCall of Old Lyme.

“Personal silence was killing me,” McGuire said. “To not speak of this was worse than being out here today.”

McGuire says the priest that abused him and others within their church never faced justice because no one came forward.