Face of Frank Pepe Pizzeria in New Haven has died

Those who knew him gave their condolences to his family, calling Bimonte a 'great man'. 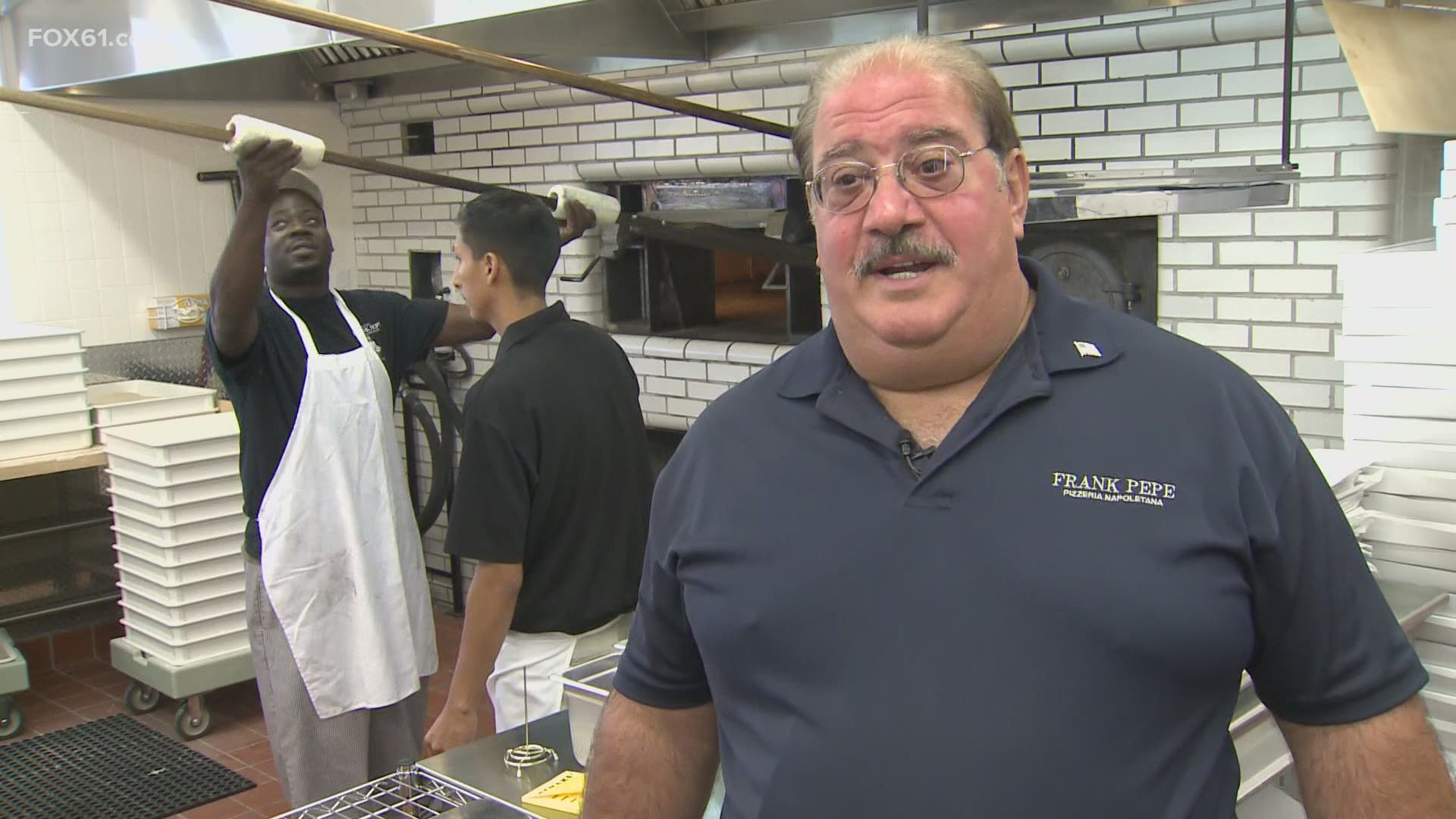 Gary Bimonte, 61, one of the co-owners of Frank Pepe Pizzeria, died at home early Wednesday evening. Thursday, their Wooster Street location was closed out of respect for his family.

Part of Pepe's marketing is the tag line "passionate about pizza since 1925." Bimonte, a grandson of the original owner, Frank Pepe, was filled with passion.

Patrons with Pepe's Pizza on their menu would need to wait another day.

"Condolences to the family, condolences to the people in the community that will miss him and God’s favor," said Leonard Funkhouser, who was visiting Connecticut from Kentucky, with his wife, who had been to Pepe's on a previous trip east.

The restaurant his family said Gary "was incredibly grateful for all of the happiness that our family brought to so many people through our love of pizza."

"I literally, in 30 years, have had a lot of fantastic dealings with Gary," Paul Duda, owner of the Studio Duda.

This includes a get together two weeks ago.

"It was actually working on a new photo ad campaign," said Duda. "He’s just a great guy. He believes in the (Wooster Street) neighborhood."

And Bimonte, a grandson of Frank Pepe, believed in giving back.

"We were doing this whole photo shoot and we had an extra 30 pizzas and he called the police to come pick them up and then took the rest to I think it was the Columbus House," added Duda.

Columbus House is a local shelter. And Duda said Bimonte was all about expanding the brand, as Pepe’s now has 12 different locations in four states.

"He was talking about, I think, as far as Florida."

Across the street from Pepe’s is Zeneli Pizzeria, in business for about a year and a half.

"I got the opportunity to meet Gary in person," said Gazmir Zeneli, the owner.

Bimonte was interested in how Zeneli made their calzone because Pepe‘s customers were telling him it was good. So Zeneli shared.

"I think he was the only one on this street that we wouldn’t expect that was going to be supportive of us and he was and so we really feel bad," said Zeneli.

Bimonte's death elicited a response from Dave Portnoy, of Barstool Sports, who recently called New Haven pizza the best in the world. He tweeted, of Bimonte's passing, "changed the game. RIP."

We will always remember Gary for the love he had for this City, his employees, and his family. Please keep his family in your thoughts.

U.S. Sen. Richard Blumenthal said in a tweet he was sad to learn of Bimonte's passing.

"When you think of pizza, you think of Pepe’s. My thoughts are with his family during this difficult time. Thank you, Gary, for many great slices & memories," he wrote.

Sad to learn of Gary Bimonte’s passing. When you think of pizza, you think of Pepe’s. My thoughts are with his family during this difficult time. Thank you, Gary, for many great slices & memories. https://t.co/YlD9FGoZmz

In a Facebook post, Pepe's Pizza said the New Haven location will be closed for business on Thursday.

Bimonte was the longtime face of the restaurant as one of Frank Pepe’s grandchildren.

Bimonte's Pizza in Cheshire sent out a note on Facebook, sending their condolences to Gary's family calling him a nice man, gone too soon.

Dean Falcone, one of the producers “Pizza, A Love Story,” paid tribute to Bimonte on Facebook.

“I have known him since I played for his Dad’s little league team. Such a big heart,” he wrote. “He was a good friend to our movie ‘Pizza, a love story.’ We will miss you Gary.”

Frank Pepe Pizzeria Napoletana was founded in 1925 by Frank Pepe on Wooster Street in New Haven. It originated the New Haven-style thin crust pizza and is well-known for its specialty White Clam Pizza.

The pizza shop with roots in New Haven has grown to more than 12 locations across the East Coast including six pizza shops in Connecticut, three in Massachusetts and one in Rhode Island and Yonkers, NY.