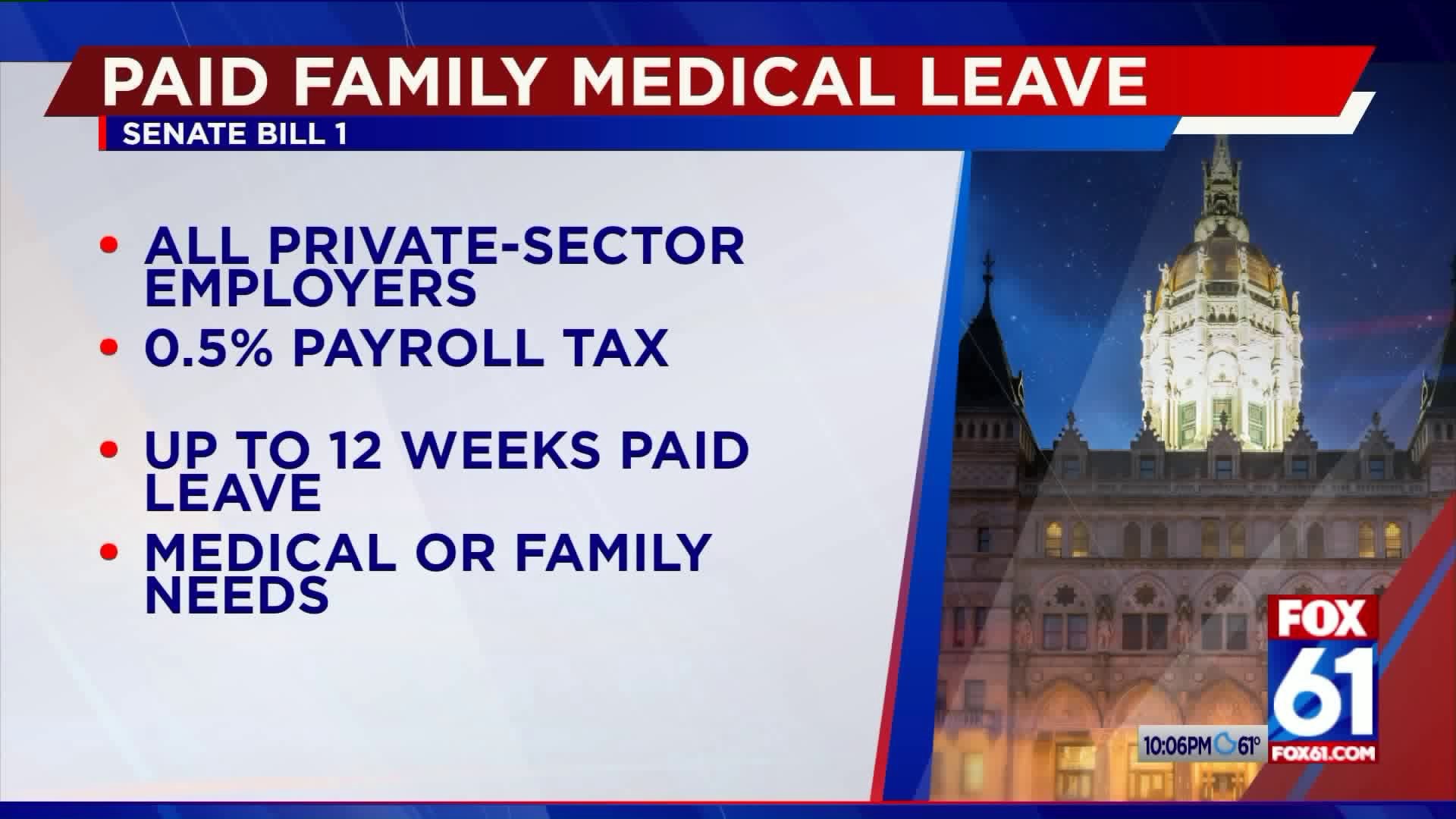 The bill passed 21-15 Wednesday and now awaits action in the Democratic-controlled House of Representatives.

Under the legislation, most Connecticut workers would be charged a 0.5% payroll tax to finance the program. Eligible individuals would receive partial wage coverage while they take up to 12 weeks off from work to care for themselves during a serious illness, a loved one or a newborn.

Lamont criticized the bill for including a "top heavy" governing body, which he says could threaten the success of the $400 million initiative.

Democratic lawmakers say they're hopeful Lamont will ultimately sign the bill. Republicans vow to prevent an override of Lamont's veto.

Lamont released the following statement regarding the vote in the State Senate tonight on legislation creating a paid family and medical leave program in the state:

“My commitment to enacting paid family and medical leave has never wavered. I know how important it is to hold onto your best employees while they care for their family or themselves. This program will make Connecticut more attractive to young workers and those with families, and it’s the right thing to do. However, at the same time that we are trying to streamline state government to make it more efficient for our residents and businesses, we should not tie the hands of the quasi-public agency that will have to oversee and implement what is essentially a $400 million dollar start-up company. The families waiting for these vital benefits cannot afford another healthcare.gov. We need to make sure this program is solvent, efficiently administered and nimble enough to adapt and adjust as needed, particularly in its first few, crucial years. I don’t believe the legislation, as currently drafted, will allow for that. I hope that once the budget is behind us, the legislature will be willing to continue our productive conversations around how to start up this important program in a way that offers the best user experience at the lowest cost to beneficiaries and taxpayers. I remain committed to bringing paid family and medical leave benefits to Connecticut’s workers.” 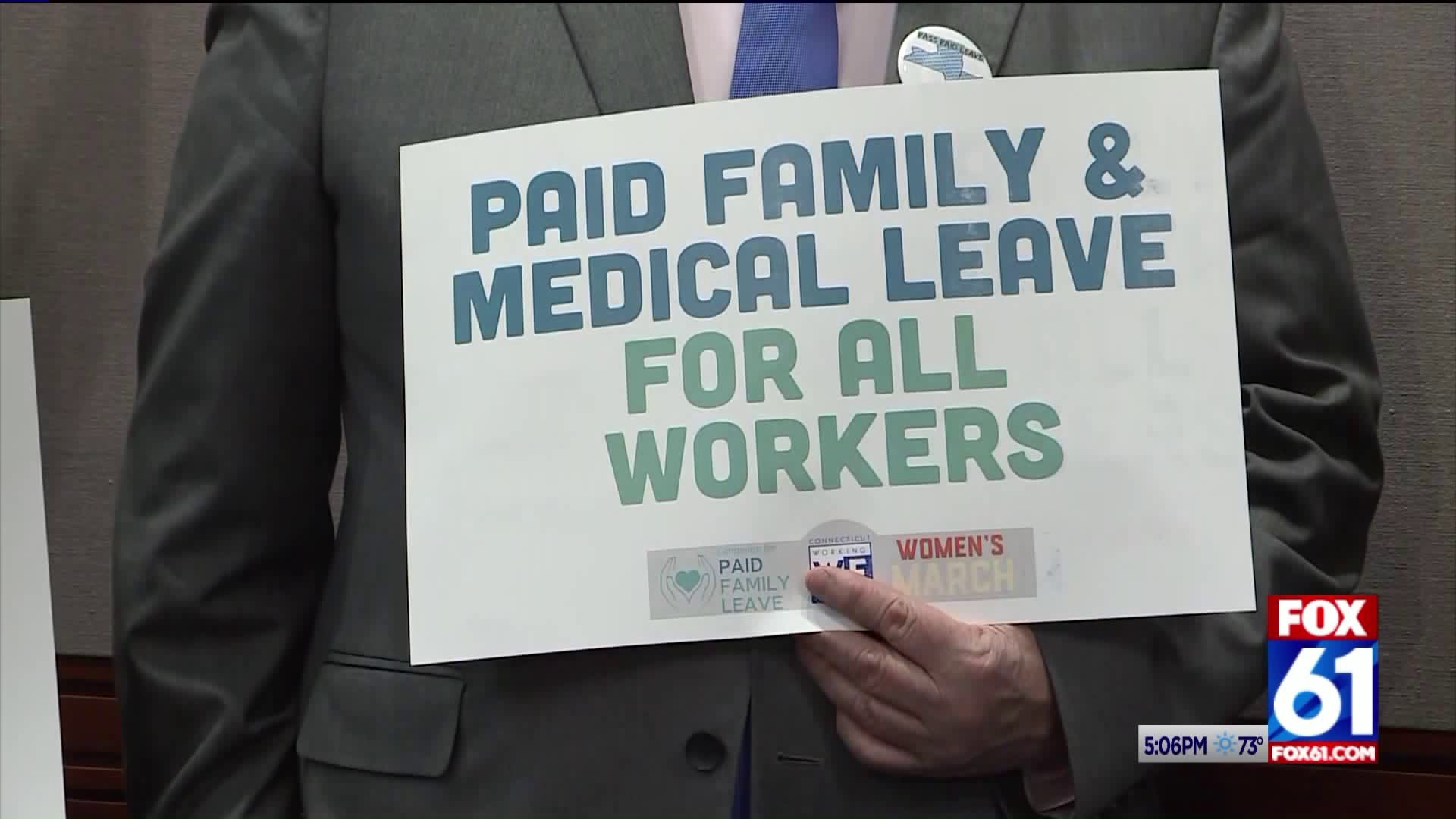 HARTFORD — Governor Ned Lamont stepped to the microphone Wednesday to deliver a stunning announcement regarding paid family medical leave. “I want to do big, bold, progressive things but sometimes I do them in a conservative way,” said Gov. Lamont.

Gov. Lamont will veto the Paid Family Leave bill in its current form. He said, “We’ve been negotiating in good faith with the legislature about paid family for some time and I don’t think we’re there and I was really surprised to see they were running the bill in the state senate.”

But Sen. Marty Looney, (D) President Pro Tempore said, “We also told him clearly a week ago that we were going to vote on the bill today.”

The bill labeled SB1 is the hallmark of the Senate Democratic agenda. “That’s why it’s so important for us to do this bill. It is SB 1. It reflect what we think is the core value of the Democratic Party to do and that’s why we’re doing it,” said Sen. Looney.

Gov. Lamont told Fox 61 he wants to see the 400-million dollar initiative shopped around to the public and private sectors. He wants a bidding process and doesn’t want to rush.

“I want to make sure it’s a process where we invite the best and brightest to bid on this. Folks who have done it before. Be that out of the private sector, public sector, DOL,” he said.

In its current form, the paid family leave bill would allow as many as 200,000 employees 12-weeks off paid for a qualifying personal illness or the illness of certain family members. It’s funded through a .5% payroll tax deduction. There’s questions if the fund would be solvent. Democrats say they have time to get on the same page.

“We have a whole year and a half before we even start contributing to the fund and we have two and half years before people start getting paid out benefits,” said Sen. Julie Kushner, the Co-Chair of the Labor Committee.

On this day the Republicans also took to the microphone to lay out their alternative to Paid family leave which they will offer as an amendment.

Their plan doesn’t mandate employers do anything, but would allow for the option to join private insurance pools in other states who already offer paid family leave. “The more people in the pool, the rates decrease,” explained Senate Republican Leader Len Fasano.

An employer could decide not to offer it. If they do, they could have the employee exclusively pay for it, share the cost, or fully fund the benefit. “It’s flexible for employee, affordable for the employee and not mandated for those employees who just don’t want to do it,” said Sen. Fasano.

This is the first time Democratic legislative leaders have openly opposed the Governor. Governor Lamont did say he might want lawmakers to tackle paid family leave in special session, along with tolls.