Know your rights: What are you required to do during a traffic stop?

In many Black and Brown families, it is common for parents to have “the talk” with their sons and daughters at a young age about what to do if they are ever stopped. 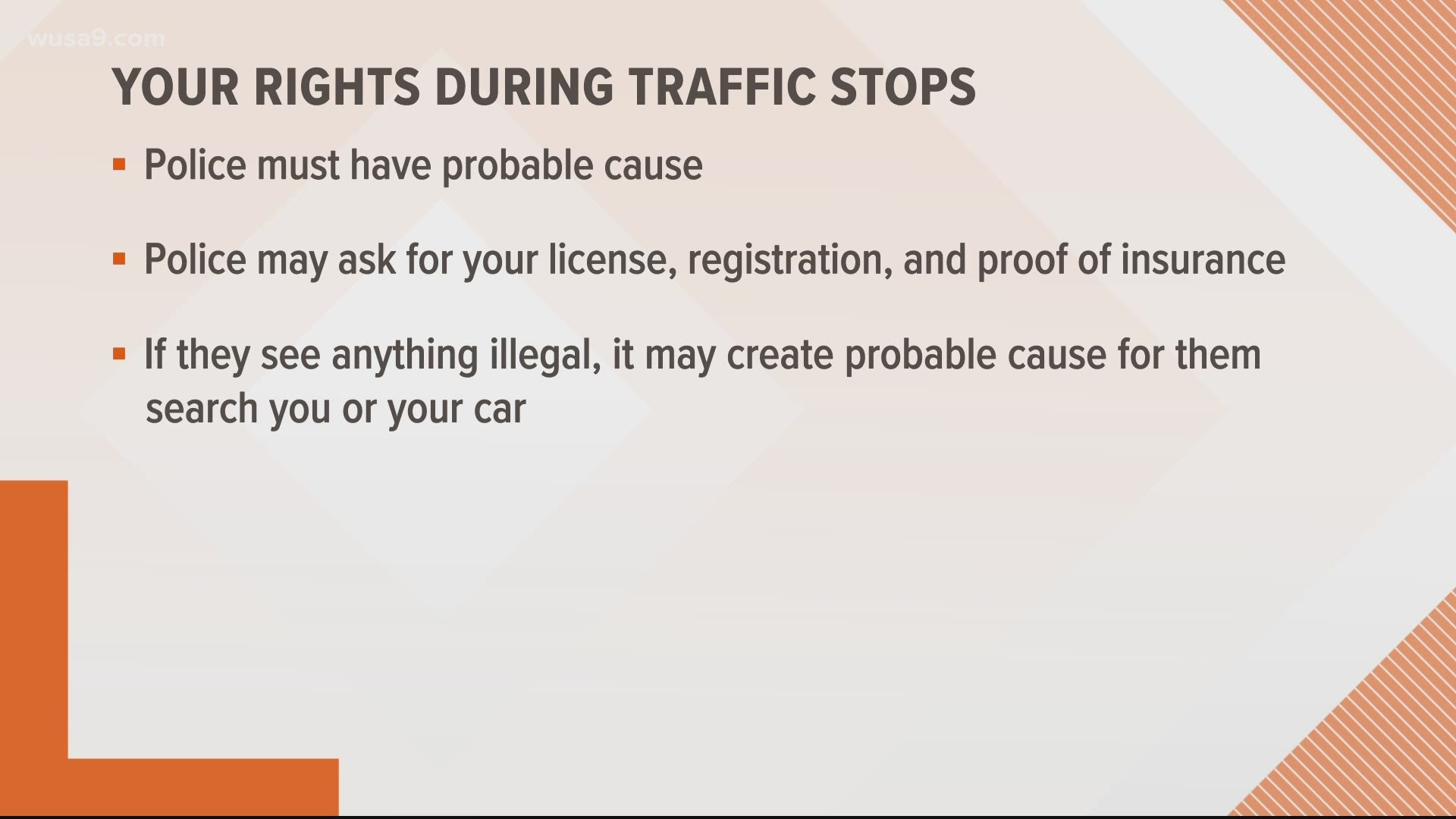 WASHINGTON — Incidents of police encounters currently dominating the headlines show how quickly things can go wrong during traffic stops in the United States.

Black drivers in America are around 20% more likely to be stopped by police compared to white drivers, according to a study from the Stanford Open Policing Project.

In many Black and Brown families, it is common for parents to have “the talk” with their sons and daughters at a young age about what to do if they are ever stopped by police.

Jackie Carter with the Alliance for Safe Traffic Stops told WUSA9 it is important for people to know their rights if they are pulled over by police.

According to the Lawyer’s Committee for Civil Rights Under Law, police must have probable cause – meaning a strong, unbiased, and factual reason for believing there was a traffic violation in order to pull you over.

The organization added police may ask for your license, registration, and proof of insurance. If officers see anything illegal, it may create probable cause for them to search you or your car.

Carter analyzed the video of an incident in Virginia where a Black and Latino Army officer was pulled over, pepper-sprayed, and arrested in 2020.

“I understand completely how the motorist wanted to go to a well-lit area. That was very smart of him. I also think putting his hands up where they could be seen as smart, but we also have to understand the law is that if an officer requires you to get out of your vehicle, you must do so,” Carter told WUSA9.

According to the Lawyer’s Committee, it is important to stop when safe, turn off your car engine and keep your hands visible.

The civil rights organization added for drivers not to consent to a search of their car or personal belongings.

Carter advised that people should avoid reaching for any items on themselves or in their cars without specific instructions from the police.

It is described as “an identification system that allows motorists to remain stationary in their vehicles during a traffic stop by eliminating reaching for required identification (driver’s license, registration, and insurance card).”

The tool is installed on a driver’s side air vent or visor which allows people to keep their hands visible.