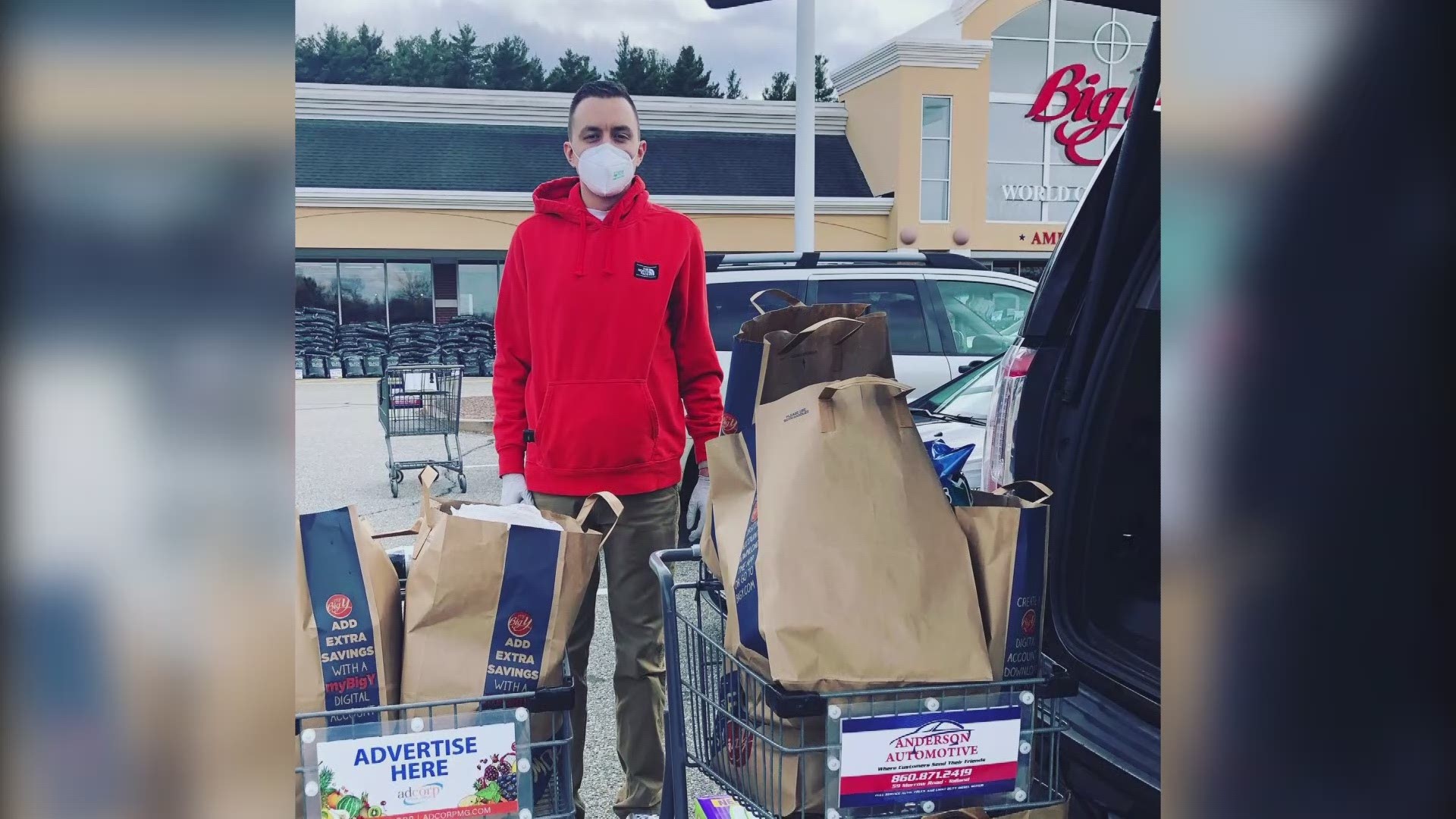 MANSFIELD, Connecticut — There’s a saying “no good deed goes unpunished,” that is exactly what one Mansfield teacher is dealing with right now.

When the pandemic hit and many were reluctant to leave their homes, Louis Goffinet had posted on his Facebook page offering to go food shopping for family and friends.

“I had a family reach out and let me know that they were hoping I could shop for them, but that they were sort of tight on money because they had both been laid off, they both had very significant health concern,” said Louis Goffinet, Mansfield Middle School Teacher.

So he decided to start a Facebook fundraiser just hoping to cover this family’s grocery bill.

“That fundraiser quickly snowballed, my $200 goal that I had set for the fundraiser I reached overnight and by the next morning I had $1000 and by the end of that week I had 5000,” said Goffinet.

It didn’t stop there. As word spread of how Louis was giving back to the Mansfield community, people continued to donate. In all of 2020 he ended up raising more than $40,000.

The bulk of that money was spent buying groceries for local families about 150 grocery trips in total, he also used the money to help families with other pressing needs.

Louis was feeling good about how he and a couple friends were able to have an impact on their community during this pandemic. That was until tax season rolled around, Louis was hit with a big tax bill.

“The payment processor for Facebook fundraisers issued me a 1099K essentially recording my $41,000 raised through Facebook fundraising as personal income. Through talking to some tax agents and CPAs it does seem like I’m going to be on the hook for about $16,000 of income tax on this fundraiser,” said Goffinet.

In hindsight Louis says he should’ve been set up as a nonprofit or LLC to avoid this tax penalty, but he added that was never his goal, his goal was simply to raise $200 to cover one families grocery bill.

“It’s not some thing that I tried to benefit off of or even considered benefiting off of. I really felt like I was the middleman for the community that wanted to help, and I was able to find people in the community who needed help,” said Goffinet.

State Rep. Gregg Haddad who serves Mansfield, now helping Louis work with the Department of Revenue Services here in Connecticut to see if there’s a way he can avoid this tax liability at least for the state portion.

“I think the rise of social media and the way that these fundraising efforts by a single individual can sort of go viral has led us to a point where we’re at becomes possible to raise $40,000 in an individual effort, but I don’t think our tax code has contemplated that quite yet,” said Rep. Gregg Haddad
(D) 54th District.

Louis is also working with a tax attorney to try and fight the much larger federal portion of the tax bill.

In the meantime the community now coming to support him, after he helped them. So far more than $2000 has been raised for him to put towards this bill.

If you’re interested in helping Louis out with this tax bill, you can do so at  PO BOX 94 Mansfield Center, CT 06250.